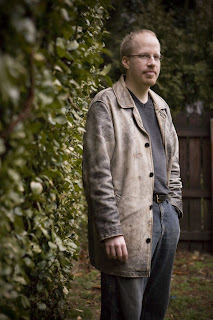 Meet Gregory A. Wilson, he is the author of the wonderful fantasy novel "The Third Sign", about a young boy who fleas from his city when an unexpected attack occurs. I got the wonderful chance of interviewing this author, and here's what came of it -

To start off, tell us a little bit about your background:

Heather: How Long Have You Been Writing?

Gregory: In general terms I've been writing since about the age of nine or ten, over twenty-five years ago now (gulp)--but started doing my first "serious" writing when I was a senior in high school, about seventeen years old. At the time I wrote plays and a few short stories, along with a poem or two. I didn't start thinking about writing novels until I had gotten my Masters degree in the mid-nineties.

Heather: what started you writing for publication?

Gregory: I've always been interested in drama and in college I wrote a number of plays and screenplays and submitted them to various national contests--I took honorable mention in two such contests, which was as close (at the time) as I had gotten to publication. My first actual publication was on the academic side, an article on the court masque in 2001 (when I was in graduate school getting my doctorate), and I had to publish academic work for career reasons. I began writing creative work out of a desire to get away from academic subjects for a while, and found I enjoyed it a great deal…and wanted to go further with it.

Heather: Do you have a set time when you write, or just whenever you get the urge?

Gregory: I've tried various ways to create set times to write, and I have gotten more disciplined over the years…but I still haven't found the "one time" to write yet. Still trying, though, as I think it would help make my writing more efficient.
Heather: Who is your favorite author?

Gregory: A tie: J.R.R. Tolkien, who wrote the books that captured my imagination as a child and kept it as an adult, and William Shakespeare, who is--well, who is simply the best, in drama or any other literary form.

Heather: Have you ever had writer's block, and if so how do you get rid of it?

Gregory: Not on creative work, though early in my career I had a lot of false starts on novels--which was a sign that I hadn't figured out my creative process yet, nor how to create a compelling story. I confess to sometimes having nothing to say on my blog, and so I've learned to post an entry there only if I really think it matters (usually a little more than once a week) rather than just trying to force it.

Heather: What do you recommend to aspiring authors?

Gregory: Whoo. One, read a lot. Two, write even more. Three, listen to others as well as yourself. Four, be persistent. Five, be confident. Six, be humble. And seventh--and most important--be patient, with the process and yourself. It will serve you well in this business.

Heather: How do you invent your characters?

Gregory: That really depends. In some cases the story dictates the characters; in others I get the idea for a character first, from someone I meet or read about (or sometimes the opposite of that person) or combinations of people I meet, and the plot flows from their interactions with others. But the key is to get to know and understand real people; it makes creating realistic characters, even in fantastic worlds, a much easier proposition.

Heather: I know a few authors who keep records (almost like police records) of height, weight, background, etc. of their characters, do you keep tabs on your characters, and if so, what do you usually make note of?

Gregory: Usually not, though in some of my work I'll jot down a couple of notes about a character as part of my general outline, especially in my epic fantasy material where there are more people to keep track of.

Heather: Some authors say that they feel as though his or her characters are real, do you feel this way, and what do you think about this?

Gregory: Yes, I'd say this is true--they certainly have to seem real, and react realistically. More important, they need to speak to me with a clear voice--the clearer the voice, the more real the character. If they're not clear, I need to work on or ditch the character altogether.

Heather: Do you have anything in the works?

Gregory: My second book ICARUS is out on submission, and I'm working on a third, entitled GRAYSHADE. Each book is part of a separate series, and all are different kinds (or subgenres) of fantasy.

Heather: What would you say is the neatest thing you know?

Gregory: That there are so many things I still don't!

Heather: What was your favorite part about writing your book?

Gregory: The feeling that I was getting the chance to share my private world publicly. Having people tell me they enjoyed the experience made it that much better.

Heather: Has music ever inspired your writing?

Gregory: Sure--and I write lyrics for my band THE ROAD (a progressive rock band which you can find at http://www.thebandtheroad.com/... I'm also the lead singer and trumpet player), so I've always felt there was a close connection between music and writing. I often imagine music in a scene I'm working on.

Heather: Do you like to write in complete silence or does it have to be noisy?

Gregory: Kind of both, strangely--I like listening to things while writing, but I must admit I write most efficiently when I don't have any distractions. So I usually try a little of both, which isn't the most clear-cut way of doing things, but it's mine.

Heather: What made you put your characters in the setting that you did?

Gregory: Depends on the book--in THE THIRD SIGN, the story (set in a nation on a mythical planet) dictated the characters who populated it to a degree. On the other hand, in my book ICARUS I imagined the two main characters well before I imagined the world in which they would operate, and GRAYSHADE is somewhere in the middle between those two points.

Gregory: Keyboard, thank God. You'd have no shot of reading what I wrote if I did it with a pen.

Heather: What do you think is the hardest part about being an author?

Gregory: The time factor--finding time to write and the length of time it takes for things to happen in the process. You have to be very, very patient at every stage of the game, and although I am pretty patient I must admit it got very hard at times to maintain it.

Heather: What were the circumstances surrounding your decisions to become an author?

Gregory: I always loved to read, and always prided myself on my ability to communicate…writing was a natural outgrowth of those two things. When I wrote my academic book and realized I could stick out a long project, it paved the way for THE THIRD SIGN--and that in turn made it easier to write ICARUS. I still enjoy the process of communication and being able to talk with readers about their connection with my work and having the chance to do so regularly was one of the big factors in my becoming an author.

Heather: Some people say that you need to live life before you write a book, do you think that it’s experience that writes a book or imagination?

Gregory: A combination. Experience can give a story an air of assured certainty, but it can also misjudge things. Imagination is critical for anything good you're going to develop, in writing class or otherwise.


Here's one of many excellent reviews for "The Third Sign" -


Find more reviews and even read an excerpt of Gregory's debut novel "The Third Sign" here.

Also, head on over to http://www.gregoryawilson.com/ to learn more about him!

Thanks for the interview, Heather--I enjoyed it.

You are most welcome, Gregory!

Gregory - your books certainly sound like attention grabbers! I'll be on the look out for them!